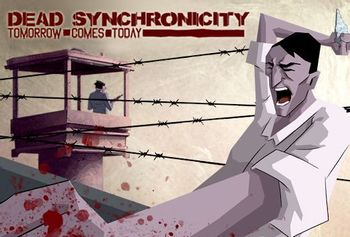 Dead Synchronicity (released April 10th, 2015) is an Adventure Game about a man named Michael, who awakes in a Crapsack World after a disaster that destroyed most of his city, possibly the world; military forces are now in control and there is an epidemic of "Dissolved". The main objective of the game is to find out who Michael was and the story behind what happened while he was in coma.The official website can be found here