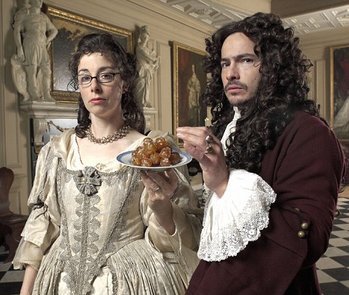 The Supersizers Eat... is a BBC television series. Every week, comedienne Sue Perkins and food critic Giles Coren get a complete physical checkup, choose a period in British history, put on period costumes, rent a period house/manor/villa to live in, then proceed to eat (and booze) their way through every single popular dish from that time period, all followed by a doctor follow-up to assess the damage done after a week of gluttony.

Much better than it sounds. Giles provides the knowledgeable tidbits and Sue provides the snarky running commentary. Not to mention that they engage in the cutest (and most sarcastic) UST in the history of documentary filmmaking. And the food is all authentic and heavily researched, which means they tend to alternate between looking wonderful and looking worthy of Fear Factor.

Giles and Sue ended the program to avoid Seasonal Rot and because the sheer amount of food and alcohol they had to consume was taking its toll.

Sue and Giles reunited for a special called Giles and Sue's Royal Wedding, wherein they don BBC costumes and look at the history of royal weddings. They then followed this up with a series called Giles and Sue Live the Good Life, where the two presenters examined what it would have been like to live the lives of the protagonists of the classic sitcom The Good Life.