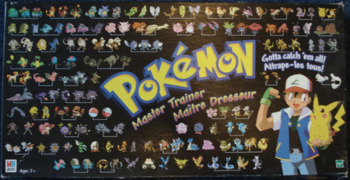 Pokémon Master Trainer is a board game adaptation of the well-known Pokémon series of video games (though it mostly takes inspiration from the more well-known anime) where players opt to collect Pokémon while traveling around a large game board in a frantic race to see who can get the most powerful mons to challenge the Pokémon League Champion and win the game. Using dice rolls to navigate and build their party players collect Pokémon chips and powerful support cards to stack the odds in their favor while doing everything they can to hinder their rivals.

Nowadays the game is mostly remembered for being a surprisingly complicated and brutal ordeal where even the slightest mistake or run of bad luck could spell disaster. Catching even low level Pokémon could prove difficult and luck seemed to govern success far more than skill or strategy, especially for a game primarily aimed at young kids. Despite its many shortcomings, however, the game is still looked upon fondly by nostalgic gamers to this day who remember it for being a mostly fun (if punishing) experience.