Wrestling / WWE Brawl for All 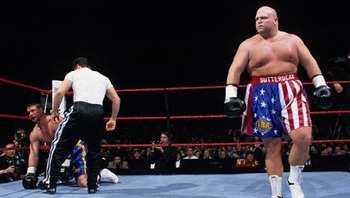 The end result of a truly dumb idea in wrestling.
"The stupidest idea that ever made air in the WWF led to injuries on the talent roster, led to bad feelings amongst the boys who were actually going in there beating each other up. The fans didn't care, nobody believed it was a shoot anyway, they killed Dr. Death's WWF career, and they cost themselves millions of dollars on that one fight because they were fuckin' stupid!"
—Jim Cornette, "Who's Slamming Who" podcast March 16, 2009
Advertisement:

The WWE Brawl for All was a "shootfighting" tournament held by the WWE (then the WWF) from June 29 to August 24, 1998. The idea behind it was that 16 "tough guys" in the WWF would face off in a tournament that was a series of shoots where, unlike regular professional wrestling, nothing was scripted in advance and the fights were 100% real. The concept was conceived by Vince Russo.

The rules were as follows:

For years, the whole thing was thought to be a vehicle to push "Dr. Death" Steve Williams (who was famous for having a legitimate "tough guy" reputation outside the ring) to main event status, until Vince Russo admitted in an interview that the entire event was created when he heard Bradshaw brag about being the toughest guy in the locker room and decided it would be awesome to see someone beat him for real. Bart Gunn went on to win the tournament, but was set up in a match at WrestleMania XV against professional boxer Eric "Butterbean" Esch, who proceeded to knock him out in 35 seconds.

In the end, no one benefited from the Brawl for All, except maybe Butterbean, whose knockout of Gunn is considered among the most brutal of all time. Bart Gunn was fired immediately after the fight with Butterbean. Steve Williams suffered a hamstring injury (which led to his defeat). Savio Vega reaggravated an arm injury that led to him never working for the WWF/WWE again. Most of the other participants were gone within a year. And the fans absolutely hated the whole idea of Brawl for All with chants like "Boring!" and "We want wrestling!"

In the end, the Brawl for All was left as "one of those ideas that looked really good on paper, but was terrible in execution." It was inducted into WrestleCrap.

Tropes associated with the Brawl for All include: