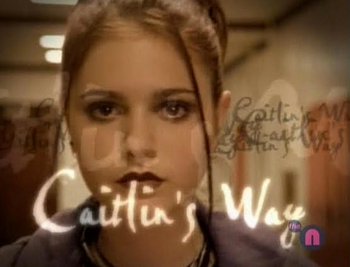 Caitlin's Way is a 2000-2002 Nickelodeon live-action Tween Drama series. In Australia, it is known as Just A Kid.
Advertisement:

Caitlin (Lindsay Felton) is a troubled girl who has bounced from one foster home to another after her father leaving and her mother's death. Her pain is hidden by a tough exterior and troublemaking, which eventually leads to her getting kicked out of Catholic school. Instead of going to a juvenile detention center, she decides to move to Montana with relatives who don't know she exists. As the three seasons progress, she eventually learns to adapt to the place so foreign to her and work out her problems, as well as build connections to the people around her. Of course, they don't trust her at first...

This was Nickelodeon's most famous attempt at a low concept dramatic series, and it was not attempted again until Zoey 101.