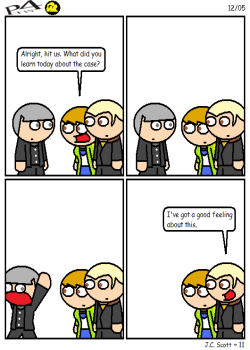 is a webcomic originally published on The Duck by J.C. Scott, aka Strain42. It is a sequel to Persona 3 FTW based upon the game Persona 4. The comic follows the day-by-day progression of events of the game, running from April 11, 2011 to March 21, 2012. Following Persona 4TW was Persona Won, based on Persona, and Persona 2 Win, based on Persona 2.

(with the new link for Gold'n here