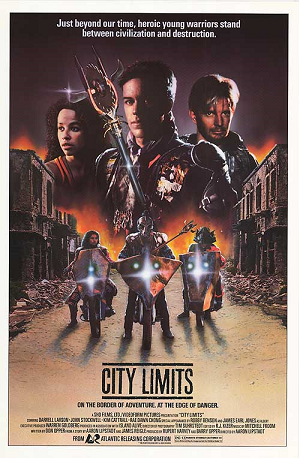 , starring Klaus Kinski. The film earned them a Saturn Award nomination. With that cachet, the duo worked on their second feature, City Limits.

Fifteen years from now, the world is lit by widely spaced 40 watt light bulbs and populated by people who wear weird clothes. A mysterious plague that's Only Fatal to Adults has devastated the world and left the surviving children to grow up on their own. The children have created a new society with only comic books and other old-world pop-culture as their guide. In this dystopia, your hero Lee (the cowboy guy with a cow skull helmet) decides to go to the big city (Los Angeles) to prove himself and join the most famous biker gang around — the "L.A. Clippers". He soon ends up a pawn in a battle between the Clippers and a rival gang led by the foppier brother of Alex from A Clockwork Orange.

Meanwhile Wickings (Kim Cattrall), Bolo (Norbert Weisser) and Carver (Robby Benson), part of the Sunya corporation (a group that reinvented the corporation after the apocalypse), move into town and attempt to exploit the gangs for commercial profit in an attempt to rebuild LA. "What commerce?" you ask, seeings how it's after the apocalypse and all. Well, repeat to yourself "it's just a show, and I should really just relax." Wickings tries to bring the Clippers to the negotiating table, but Bolo and his higher-ups simply stage an attack on the gang, enslaving most of them except for the few that Lee helps escape.

Anyway, Robby Benson's shady business that is selling who-knows-what to who-knows-who comes under attack once cow-skull guy convinces the assorted biker types to team up with his surrogate father Albert — played by an embarrassed James "I needed to pay the rent" Earl Jones. The Ragtag Bunch of Misfits stages a counterattack on Sunya in a finale that will shock and surprise amnesiacs and people who have just arrived on planet Earth.

Not to be confused with the early 1980s Citytv overnight program that was an Obvious Beta for MuchMusic, and was the very first appearance of Mike Myers as Wayne Campbell.