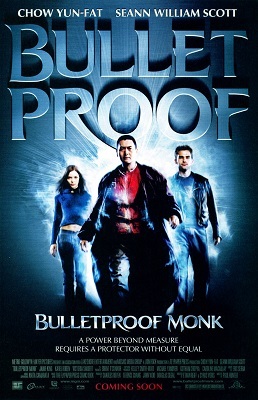 Bulletproof Monk is a 2003 martial arts action-fantasy film starring Chow Yun-fat, Seann William Scott and Jaime King and is about a bulletproof monk. The film was directed by Paul Hunter. It is loosely based on the comic book by Michael Avon Oeming.

For 60 years a mysterious monk with no name has zigzagged the globe to protect an ancient scroll - a scroll that holds the key to unlimited power. Now the Monk must look for a new scrollkeeper. Kar is an unlikely candidate, a streetwise young man whose only interest is himself. But when he inadvertently saves the Bulletproof Monk from capture, the two become partners in a scheme to save the world from the scroll's most avid pursuer. Packed with spectacular special effects and martial arts action, the Monk, Kar, and a sexy Russian mob princess called Jade must struggle to find, face, and fight the ultimate enemy.