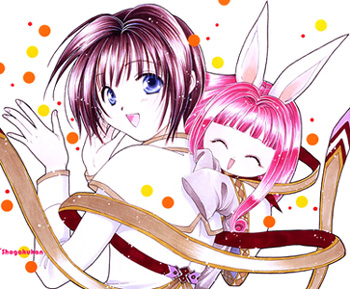 I wish I had 'Courage'...
Advertisement:

Alice 19th is a Shoujo manga written by Yuu Watase. It ran from 2001 to 2003 in Shoujo Comic for a total of seven volumes, and was licensed by Viz Media.

Alice Seno is a shy girl that's afraid to speak her mind, while her older sister Mayura is open about her opinions. Mayura seems to outshine her in everything and leaves Alice feeling inferior, though she tries to hide her emotions.

One day, Alice sees a white rabbit in the middle of the street and hears the thoughts of the people around her. Without thinking of her own safety, she rushes into traffic to save the rabbit — who turns out to be magical and can turn into a little rabbit girl called Nyozeka. She tells Alice that she has the potential to be a Lotis Master and explains that Lotis are words that possess great power.

Alice ignores Nyozeka, but quickly learns there's truth in her words. She and Mayura get into a fight because both end up falling for Kyo Wakamiya, a schoolmate of theirs. During the argument, Alice angrily tells Mayura to just disappear — which she promptly does. Nyozeka explains that Mayura has fallen prey to Mala, the darkness of one's heart.

Nyozeka explains that Alice has to use the Lotis to save Mayura from the Mala. Things get more complicated when Kyo turns out to have potential as a Lotis Master himself, and the skirt-chasing Frey was sent to guide the new masters, only to reveal that Mayura doesn't seem that willing to leave this world of darkness.