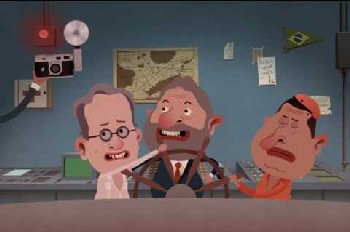 Albaro Uribe: To the right! This Dirty Communist has no idea of navigation! / Hugo Chávez: To the left! This petty yanquee imperialista takes us to our doom! / Lula Da Silva: Can you just let me navigate this thing? That iceberg is getting very close!
Isla Presidencial (Eng. Presidential Island) is a Venezolan web animation. See the YouTube channel

All the presidents of Latin America, and the king of Spain, met in the 74º summit. But the luxury cruise crashed against an iceberg, and they all got stranded in a paradise island. Now, they must give up their dirty habits and do some actual work to survive... or fail miserably while trying.

Featuring the rank incompetence of