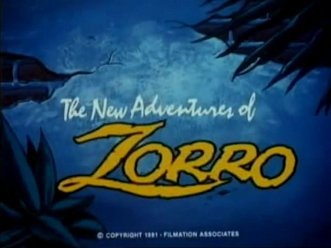 The New Adventures Of Zorro
"As Don Diego, I pretend to be afraid. But with a mask as my disguise, I ride into the night, and raise my sword in the name of justice! For I am... ZORRO!"

The New Adventures of Zorro is the 1981 Filmation Animated Adaptation of the black-clad, sword-wielding character. It was co-animated by Tokyo Movie Shinsha and thus has a slightly better art style than most typical Filmation cartoons preceeding it.

Don Diego de la Vega dons the outfit, and is often accompanied by his amigo, Miguel, who has his own costume. Together They Fight Crime!, but the criminals in question just happen to be the Governor General, who is backed up by the soldiers in his garrison under the command of Captain Ramon.

Unlike some other versions, Zorro calls his horse "Tempest", his archenemy is Captain Ramon rather than Captain Monastario, and Ramon's aide is Sgt. Gonzales, rather than Sgt. Garcia. The names Ramon and Gonzales for these characters actually hearken back to the first film version, Douglas Fairbanks's The Mark of Zorro (1920).