Western Animation / For Better or for Worse 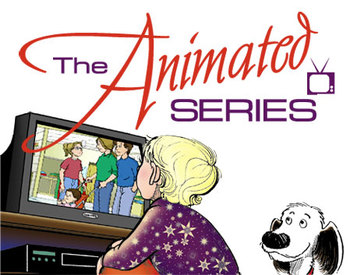 The newspaper comic strip For Better or for Worse (1979–2008; still existing in reprint form) by Canadian cartoonist Lynn Johnston was rather popular from the start, with its ongoing, real-time portrayal of family life as experienced by the Patterson family of Milborough, Ontario. In the 1980s and 1990s, Animated Adaptations of comic strips were commonplace. Naturally, that extended to FBORFW, all of them produced in Canada.

There are three "tiers" of FBORFW animations. The first was a one-off from Atkinson Film-Arts called The Bestest Present, aired on HBO on December 19, 1985, as well as CTV. It tells an original Christmas story centered on the Pattersons. Lynn's own children, Aaron and Katie, provided the voices of Michael and Elizabeth, and Rod Johnston made a cameo appearance, providing the voice of a mailman.

Beginning in 1992, another Ottawa-based studio, Lacewood Productions, produced six more specials, also for CTV. In the United States, these were seen on Disney Channel. According to Lynn Johnston, the set designs (for instance, for the Pattersons' house) required by these and subsequent TV programs led her to develop a much more sophisticated background style in the comic strips.

The six specials produced by Lacewood were:

In 2000, Ottawa's Funbag Animation produced a new animated series for cable TV network Teletoon, which began airing on November 5, 2000, and ran until December 16, 2001. Featuring introductions by Lynn Johnston herself, the show looked at three related storylines from three different eras of the strip: the mid-1980s, the early 1990s, and the late 1990s.

The series consisted of two seasons with eight episodes each, with each episode centered around a ‘theme’.

This page contains examples from all three types.