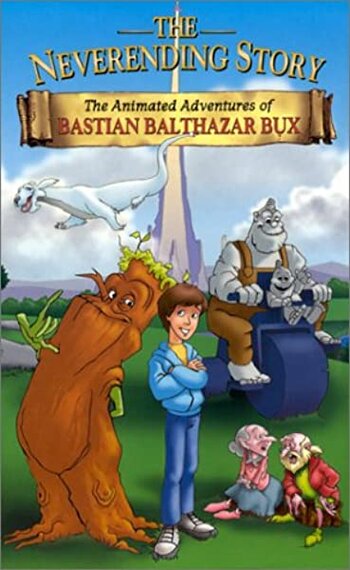 The Neverending Story: The Animated Adventures of Bastian Balthazar Bux is an Animated Adaptation of The Neverending Story, presented as a loose sequel to the 1984 feature film. Produced by CineVox Entertainment and animated by Ellipse and Nelvana, it ran for a single 26-episode season from 1995 to 1996 on Family Channel.

The overarching plot of the series is that Bastian regularly visits Mr. Coriander's bookshop and reads the Neverending Story, which transports him to the world of Fantastia. There, he undergoes various quests and adventures that range from helping out his friends to solving major problems threatening Fantasia itself. Bastian is most frequently aided in his travels by Bark Troll, a friendly if bumbling member of a race of humanoid trees, and the dog-like Falcor the Luckdragon. Engywook and Urgl, the gnomes, are also frequent allies. Other friends that show up less frequently include Atreyu and his talking horse Artax, Gluckuck the Tiny, and the Rockchewer family.

The most frequent villains that Bastian must battle against are Xayide (with her servants Three-Head and The Nimbly), Gmork of the Nothing, and the evil merchant Shadow Goblin and his slave Vermin.