Western Animation / Josie and the Pussycats 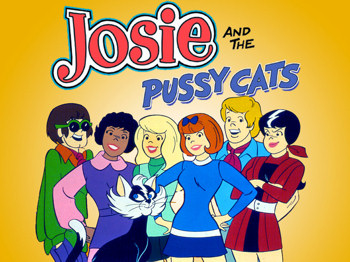 Although based on an Archie Comics publication, this series was produced by Hanna-Barbera rather than Filmation and aired from 1970 to 1971. The all-female rock trio comprised guitarist Josie McCoy, tambourinist Valerie Brown, and drummer Melody Valentine. Valerie is Black and Nerdy, Melody is a Dumb Blonde and Josie is of average intellect.

Supporting characters were Alan Mayberry, an ex-country singer who became the Pussycats' roadie and Josie's love interest; Alexander Cabot III, the Pussycats' cowardly manager; Alexandra Cabot, Alexander's twin who continually tried to steal Alan away from Josie and/or replace Josie as leader of the band; and Sebastian, Alexandra's snickering cat.

Each episode usually had the group traveling to their next gig or recording session, only to stumble upon criminals, mad scientists, or terrorists and foil their plot.

It had a successor series, Josie and the Pussycats in Outer Space that aired in 1972. While posing for a photo shoot in front of a space ship, Alexandra accidentally makes the group stumble into the ship and it blasts off. By the time they get the ship under control, they are hopelessly lost in space. A woolly creature named Bleep joined the cast, whom Melody could communicate with. Each episode had the group fly the space ship, trying to find Earth, only to stumble upon a planet with some kind of problem, usually a dictator or invaders, and fix it. The series was cancelled without the group making it home.

It was adapted into a live-action film in 2001. For information on that, click here.