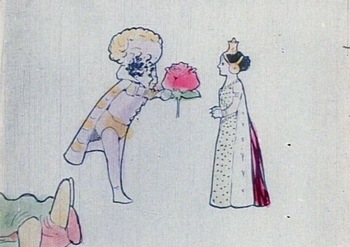 By 1911 McCay was a veteran cartoonist with newspaper comic strips such as Little Nemo and Dream of the Rarebit Fiend. Meanwhile, a man named J. Stuart Blackton had been making some of the earliest examples of animated films, both in Stop Motion (The Haunted Hotel), and animated drawings (Humorous Phases of Funny Faces). In 1911, the two worked together on an animated adaptation of McCay's Little Nemo comic, producing what might be the first Animated Adaptation of all time.

More than half of the completed film is actually live action. It begins with a scripted sequence in which McCay meets with some of his friends, and bets them that he can make a 4000-frame animated short film. The next scene shows McCay and his assistants working in the studio. Next, McCay gathers his friends together to show them the film. The movie then concludes with by far the most famous part, McCay's animated short, which he made by hand-drawing 4000 images on rice paper. The images were photographed by Blackton.