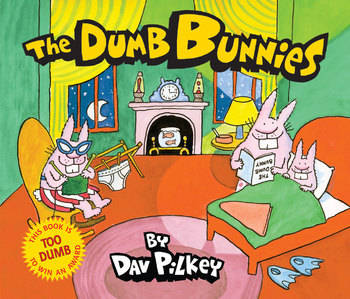 From the mind of Dav Pilkey, the man who would later bring us Captain Underpants, comes The Dumb Bunnies, a children's book series about a family of astoundingly moronic, pink-furred rabbits who wear nothing but underwear.

In every book, Papa Bunny, Mama Bunny, and Baby Bunny would engage in some kind of everyday activity, like going to the beach or celebrating the holidays together. But because of their stupidity and eccentricity, they would always do things in the opposite manner (like sleeping under the bed or wearing winter clothes in the summer) or misunderstand how something functioned (like literally watching a football on a TV or mistaking a revolving door for a carnival ride). And yet despite all the silliness they got themselves into, they always came out with the same goofy smiles and cheery dispositions as before.

The books were given an Animated Adaptation in 1998 that was produced by Canada's Nelvana and Australia's Yoram Gross animation studios. It ran for 2 seasons of 26 episodes and aired on CBS in the United States, STV in the UK, and YTV in Canada. Episodes can now be seen at Nelvana's Keep It Weird

Interestingly, the Animated Adaptation would not be the last tryst between Canadian animation and Dav Pilkey's work. His Dragon books were made into a stop-motion cartoon in 2004 by Quebec's Cité-Amérique, while Dreamworks' Captain Underpants: The First Epic Movie had its animation outsourced to Montreal.

Compare The Stupids, for another series of books with a very similar premise.

The books and the show contain examples of: