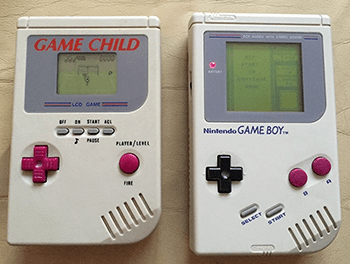 It's just as good as the real thing!
"Just as I suspected! Totally legit looking stuff! Where are the human noses? The misspellings? The choking hazards?"
— Strong Bad (complaining about knockoffs that aren't shoddy enough), Strong Bad Email #190 "licensed"
Advertisement:

A Shoddy Knockoff Product is dolled up to look like a popular and/or quality product, but being dolled up is the only work that went into it. You'd be lucky if it even functioned at all.

These could very well be used as a target of Convenience Store Gift Shopping, especially if they resemble something that an unwitting/ignorant relative thinks the recipient likes.

The Evil Twin of the Well-Intentioned Replacement. While both tropes are about poorly made substitutes, that trope is with the genuine hope of making up for the thing being substituted. This trope is about just plain old ripping you off.

Compare Bland-Name Product (to show a popular product in a show without stepping on trademarks), The Mockbuster (the equivalent with works of art or entertainment), Unlicensed Game (an index of Shoddy Knockoff Video Games that have their own pages).

Contrast Follow the Leader (there is a clear influence, but it's not trying to make you think it's the actual work it's following), Serial Numbers Filed Off (it's almost the same thing as another, but at the very least changes anything copyrighted by someone else) and Effective Knockoff (when the knockoff is more competent than the original thing it's imitating). Bland-Name Product is when it looks like this in a fictional work, but doesn't come across as such. See also Prop.