Literature / The Postmodern Adventures Of Kill Team One 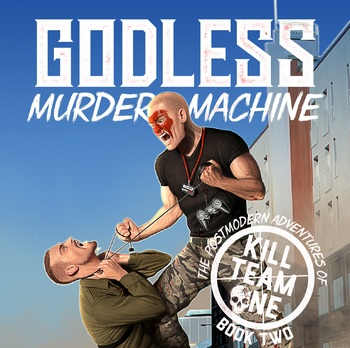 This is why they don't put cords on the controllers anymore.
Advertisement:

A series of ultraviolent novels that satirize the action adventure genre. The story follows the adventures of the eponymous Kill Team One, whose real name is Sid Hansen. Sid is a teenage super soldier of mysterious origin. Trained from birth to kill and do little else, he runs away from the secret government agency that created him and tries to make his way as an everyday person in everyday America. That turns out to be a terrible idea.

The series has a dry and irreverent style, often drawing attention to its own shortcomings and overused action adventure tropes, or subverting them altogether. Genre-Busting applies liberally.