Anime / The Desert Princess and the Pirates: Adventures in Alabasta 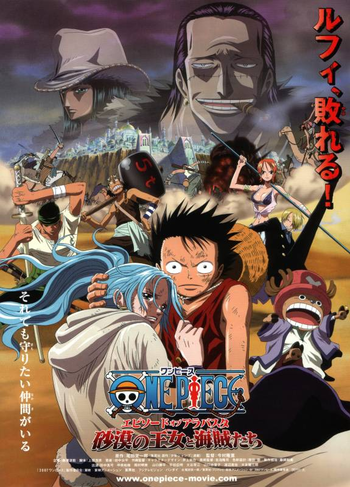 The Desert Princess and the Pirates: Adventures in Alabasta (also know as Episode of Alabasta) is the eighth film in the One Piece series.

It is essentially a condensed retelling of the Alabasta arc which had the crew arriving into the country of Alabasta to help their friend Vivi try to save her kingdom from the evil Crocodile, one of the Seven Warlords of the Sea, who had engineered a civil war in order to take it over.

Released in Japan in 2007. It became the first of the films the Funimation dub released in the following year of 2008.

See its recap page for more information about the arc.

Alternative Title(s): One Piece The Desert Princess And The Pirates Adventures In Alabasta