Literature / Before I Fall 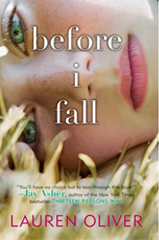 Before I Fall is a book by Lauren Oliver about Samantha Kingston, who is pretty, popular, has the best friends in the world and an amazing boyfriend. It seems that Friday, February 12, is going to be just another normal day, with school, friends, and partying. However, it ends with a horrible car crash that kills Sam and goodness-knows who else.

But instead of being sent to the Pearly Gates or thrust down into the fiery pits of Hades, Sam wakes up, in her bed, the morning of February 12. No one but her has any idea that she died the day before. Sam relives the same day for a week, learning more about the effects of her actions and realizing she didn't know as much about anything, including her self, friends, and schoolmates, than she thought she knew. A well received book that refuses to let characters fall into teen stereotypes, and is written by somebody who clearly understands actual teens.

Described as a mix of Groundhog Day and Mean Girls.

A movie adaption was released in March 2017. For tropes about that version see Before I Fall.