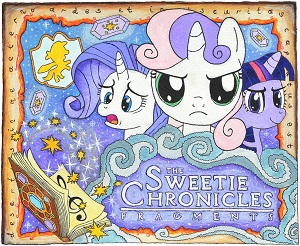 is a My Little Pony: Friendship Is Magic fanfic by Wanderer D.

With Rarity and the other two Cutie Mark Crusaders out of town, Sweetie Belle has started learning magic with Twilight Sparkle. After a magical explosion throws the two of them through The Multiverse, Sweetie finds herself jumping between Alternate Universes searching for the eponymous fragments, which contain the shattered consciousness of Twilight Sparkle.

The story takes place across multiple universes, each of which is the universe of a different pony fanfic.

The universes that have been visited to date are, in order of appearance in the story:

A 2012 April Fool's chapter begins in OAC&A, then takes Sweetie briefly through the worlds of Doctor Who, House, and Megamind. The next official chapter begins at the same point as that one, but diverges after the first scene.