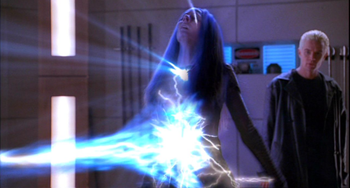 In a dark basement, Gunn is strapped to a table being tortured by a demon. Illyria blows the basement door off its hinges and sends the demon flying. She removes the medallion from Gunn's neck, causing his memories to return - including the memory that to leave the dimension, somebody else must wear the medallion. Gunn and Illyria leave, while the demon, now wearing the medallion, begins torturing himself.

In Angel's office, Wesley explains that Illyria rescued Gunn of her own accord, and Angel suspects that Illyria is hanging around Wolfram & Hart because she wants power. Illyria appears through a portal, carrying Gunn, and chokes him until Wesley acknowledges they owe her a great debt. Illyria drops Gunn and leaves.

In the training room, Spike is sparring with Illyria, who slows down time to avoid Spike's attack. Gunn is working in his office, when Lorne interrupts wearing a fedora and sporting a walkie-talkie - part of Angel's plan for Lorne to watch Illyria's movements. Gunn says he is concerned over Wesley's sanity. Lorne explains that Wesley is catatonic outside his office, and inside becomes crazily obsessed with finding new information on Illyria.

Angel voices his desire to remove Illyria from Wolfram & Hart. Gunn brings up the Apocalypse, which is still under way, with the bad guys winning. Marcus Hamilton strolls into the conference room, commenting that Angel now must pay for the Illyria's damage to Wolfram & Hart's people and property. He tells Angel that the Senior Partners want him to act as witness in a case involving a ceremonial demon pact. A pregnant woman named Amanda enters Angel's office, explaining that seers of the Fell Brethren foretold that her baby was holy. Amanda recognizes the Fell Brethren - though demons - are also devout, and is willing to give her baby to them. Gunn cautions Amanda that she should be careful about demon-pacts. A demon enters the room, and tells Gunn that Amanda is not their client; the Fell are.

Illyria storms into Wesley's office, calling Wesley her betrayer - he destroyed the Orlon Window hoping to rewrite history and bring Fred back to life. Wesley accepts her accusation, explaining that he would destroy Illyria to have Fred back. Illyria notes that she is bothered, but by something other than Wesley's betrayal. Illyria makes several obscure comments about time to Wesley, before clutching herself in pain. She is suddenly in the training room with Wesley aiming a weapon at her, then back in the observation room with Angel and Spike in a scene that she realizes has already transpired. Back in Wesley's office, Wesley notices Illyria's pain, and she lashes out, accusing him of trying to murder her.

Harmony is stalling the Fell demons, while Angel and Gunn privately try to talk Amanda out of the pact. Amanda explains that not only can the Fell provide her child a wonderful life being worshiped, but they promise to cure the brain-damage her husband experienced following a work injury. Angel decides to stop stalling, and begins the meeting between the Fell demons and Amanda.

Hamilton finds Wesley working in the science lab, and tells Wesley that the Senior Partners want Illyria dead. Hamilton suggests that Wesley checks the low-emanation scanner readouts. Wesley pulls up a map of the building on his laptop, with a blue entity moving down a hallway. Lorne follows Illyria, paging Angel fruitlessly on the walkie-talkie.

The three demons from the Fell Brethren enter the conference room, gushing over Amanda and her baby. Gunn discovers in his notes that the baby is going to be ritualistically sacrificed on his thirteenth birthday, but as he tries to relay this information to Amanda, Illyria bursts into the conference room, accusing Angel of poisoning her. Angel heads for the science lab, and voices his opinion to Wesley that Illyria has gone crazy, stating that Illyria "has blown all of her gaskets... man, she's out of her mind!" Spike sarcastically replies, "How can you tell? Yesterday she spent two hours mind-melding with a potted fern." Wesley then explains that Illyria is self-destructing, as the fusion between Illyria's demon essence and Fred's body deteriorates. Fortunately, Wesley has a Mutari Generator, which Wesley claims will kill Illyria. Spike shows Angel the low-emanation scanner, which reveals Illyria is currently in the training room.

As Spike enters the training room, he explodes into dust as Illyria stakes him from behind. She grabs a dagger off of the wall and throws it at Wesley, killing him instantly, then kills Lorne by punching through his chest. Angel vamps out and jumps at Illyria, who beheads Angel in mid-flight. Illyria examines the carnage, then clutches herself in pain. She is suddenly in the lobby with Angel again, then back in Wesley's office - this time, Angel is also there. Wesley notices Illyria's pain, and is surprised to see Angel. Illyria explains that Angel wasn't with her last time, and that this is an aberration in the time-line. Illyria doubles over and screams in pain.

Illyria and Angel are suddenly back in the basement, where Gunn is still being held captive. Illyria accuses Angel of ripping her out of linear progression, tearing her time-line into shreds, and stitching it back together out of sequence. They are suddenly back in the training room. The bodies of Lorne and Wesley are lying on the ground. Illyria explains how she killed them in a different time-line. In obvious pain, she tells Angel that the only way to win a war is to serve no master but your own ambition. Illyria explodes into a blue energy ball that shoots Angel backwards.

All of a sudden, Angel is back in the hallway with Spike and Wesley. Wesley is again guessing at how much damage Illyria self-destructing would cause. Angel tries to explain the time-phase Illyria just took him on, as they enter the apparently empty training room. Angel, realizing Spike is about to be staked, moves Spike out of the way. Angel reveals how he saw Illyria explode, sending him back through time. Wesley reveals that the Mutari generator won't kill Illyria, just draw out most of her energy. Illyria notes that Wesley tried to murder her to bring back Fred, and Wesley says he knows that she's all that he has left of Fred now. Illyria starts to explode into a blue light again, and Wesley uses the Mutari generator to suck off her energy. Illyria collapses to the ground. Wesley tells Angel that Illyria will no longer be stopping time or walking through dimensions, and she has probably lost some of her physical strength.

Outside the conference room, Gunn is arguing with the Fell Brethren that they have no legal right to Amanda's child. The Fell argue that Wolfram & Hart are supposed to be helping them to acquire the child, not talking Amanda out of the deal. The leader of the Fell is shouting threats at Hamilton, who turns the conversation over to Angel, as Angel walks into the lobby. Angel announces that the baby belongs to the Fell Brethren. Gunn is confused. Angel ushers all the demons into his office, to sign Amanda's unborn child away in a demon-pact. Angel tells Gunn that their job is to serve their clients.