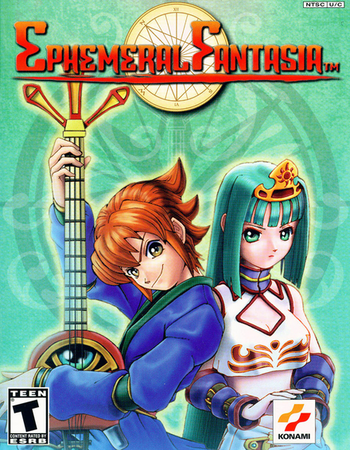 Ephemeral Fantasia is an Eastern RPG by Konami and one of the first fully-3D RPGs for the PlayStation 2. It was released in Japan in 2000 and in the U.S. and Europe in 2001. It's also known as Reiselied, which is German for "Travel Song".
Advertisement:

The game stars a wandering minstrel and his sentient lute Pattimo. They have been invited to the island of Pandule to perform at the coronation of its new king, Xelpherpolis. During the five-day ceremony they meet the bride to be - a melancholy girl named Roleiyu - and witness all manner of strange and tragic incidents. But nothing as strange as what happens on the last day, when Xelpherpolis freezes time itself and proclaims that he will never let you leave the island...

You wake up on the sixth day to discover that you're just arriving at the island: you've become trapped in a five-day time loop which only you, Pattimo, Roleiyu and Xelpherpolis are aware of. The only way to stop it is to defeat Xelpherpolis, but to do that you need to gain strength and gather allies. To do this, you need to break characters out of the time loop by averting the fates they have lived through over and over, thus "proving" that time is looping: for example, in a moment of weakness one character tries to poison another out of romantic jealousy; by preventing her from carrying out the plot, you can break the time loop's hold on her.

The game uses a compressed real-time system to depict the flow of time over the five day loop, and to recruit most characters, you must be in certain places at certain times. Unfortunately, figuring out the correct sequence of events can be an exercise in frustration.

Compare The Legend Of Zelda: Majora's Mask, which had the same basic concept.