Literature / Alex and the Ironic Gentleman 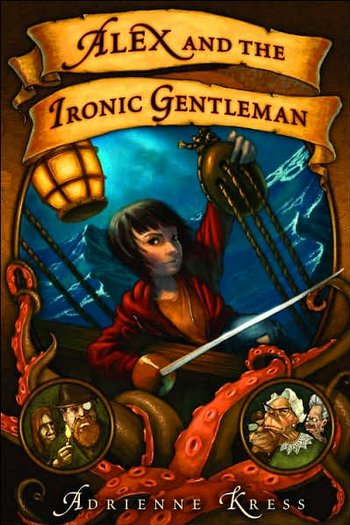 Alex and the Ironic Gentleman by Adrienne Kress, published in 2007.

Often mistaken for a boy because of her haircut and name, Alex Morningside is an inquisitive girl of ten-and-a-half who attends the prestigious Wigpowder-Steele Academy. Unfortunately, though she loves to learn, Alex just can’t bring herself to enjoy her classes. Her teachers are all old and smelly and don’t seem to know about anything that has happened in the world the past thirty years, and her peers…well they are quite simply ridiculous.

Luckily for Alex, the new school year brings an exciting new teacher. Mr. Underwood makes lessons fun and teaches her how to fence. But Mr. Underwood has a mysterious family secret—the swashbuckling and buried treasure kind—and not everyone is glad he has come to Wigpowder-Steele. When the infamous pirates of a ship called the Ironic Gentleman kidnap Mr. Underwood, Alex sets off on a journey to rescue him, along the way encountering a cast of strange and magical characters, including the dashing and sometimes heroic Captain Magnanimous, Coriander the Conjurer, the Extremely Ginormous Octopus, and the wicked Daughters of the Founding Fathers’ Preservation Society.

There is a sort-of sequel to it, Timothy And The Dragons Gate.