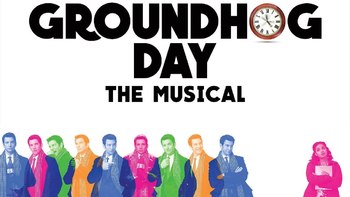 There's nothing more depressing than Small Town, U.S.A., and small don't come much smaller than Punxsutawney on Groundhog Day...
Who is that? Who is that emerging from his burrow?
Who can see today what we can't see until tomorrow?
Shaman of the shadows, springer of the spring
Is it a squirrel? Is it a beaver?
Kinda both, but not quite either!
That's right, woodchuck chuckers, it's Groundhog Day!
—The radio jingle that will wake Phil Connors every time he wakes up on February 2nd
Advertisement:

The musical adaptation of Groundhog Day, which opened at the Old Vic Theatre in London in 2016 and then transferred to Broadway in 2017. With a book written by Danny Rubin (who penned the original film) and songs by Tim Minchin, the musical tells the familiar story of disgruntled weatherman Phil Connors trapped in a "Groundhog Day" Loop where he is forced to relive the titular holiday over and over until he learns to be a better person.

The musical features examples of: