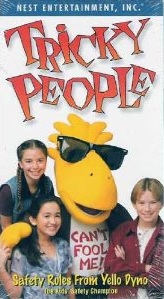 Tricky People is a 40-minute Pædo Hunt / Too Smart for Strangers Public Service Announcement written/directed by Fred Holmes and produced/distributed by Nest Family Entertainment in 1998. The PSA is based on Jan Wagner's book "Raising Safe Kids in an Unsafe World" and features an introduction by Wagner and the PSA's mascot character Yello Dyno. The story of the PSA centers on a girl named Lyric who falls prey to professional "tricky person" Reginald Charming. The PSA prides itself on its "startling and accurate" portrayal of tricky people and was created to educate its viewers on recognizing the traits of a tricky person.