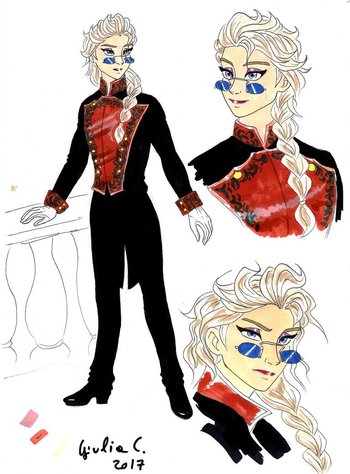 Queen Elsa of Arendelle fought back the heathens in the name of her gods. When her wife Annabella was found dead - made to believe that Elsa had felled in battle as a trick by her enemies - Elsa curses the gods she had fought for and becomes a vampire.

One thousand years later, Elsa signs a trade agreement between Arendelle and England, only to see from a photograph that an English lord's daughter resembles her late-wife.

Elsanna - Bram Stoker's Dracula is an ongoing webcomic by an artist going by the online name "shishiyoukai". As the title suggests, it is an adaptation of the 1992 film of the same name, but with characters from Frozen (2013).