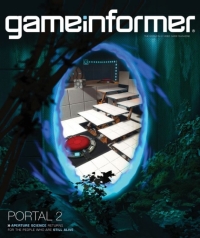 Game Informer is a American based gaming magazine (website here

) that started in 1991. It features articles, news, and strategy relevant to games and the industry and reviews new and old video games on the PC and consoles.
Advertisement:

In 2010, GI started a Lets Play called Replay on their website which airs every Saturday morning. The editors play through older games and see if they stand the test of time. While originally intended to feature only the best games, they quickly developed a fondness for obscure So Bad, It's Good games. Every episode features two segments, each segment highlighting a different game. They also started Super Replay, in which they play through the whole game. Replay now has its own page.

They also started a Let's Play of new games in Test Chamber.

This magazine contains examples of: