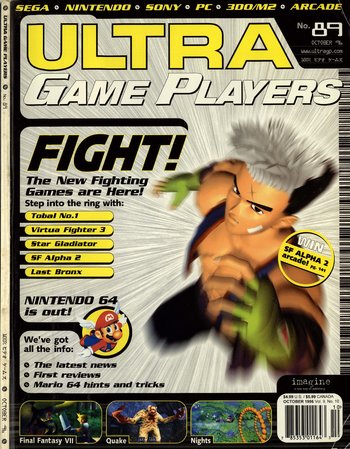 The first issue of UGP

Game Players was a video game magazine that had its best years in the mid-1990s. Starting out as a seemingly-regular game mag (debuting in 1989 around the same time as Game Pro and Electronic Gaming Monthly), there was very little to separate it from the competition as far as video game magazines went, but in the mid-90s, it shifted into a more comedic, irreverent style with Chris Slate taking over as its Editor. Under Slate, the entire magazine started getting more deliberately wacky, with the game reviewers gaining personality (and faux-personality, with Bill Donohue as an evil dungeon-master and Mike Salmon as a sarcastic ladies-man).

The letters page started with several running gags, with Donohue and the fans building upon each others' jokes, creating new fictional characters and personas, speaking of a "Cleansing" (and later, "The Rinsing"), and promises of world domination and violent reprisals. It was just that kind of a mag — mostly nonsensical, and all in good fun (and vulgar taste). While Game Pro was far bigger, and EGM and Diehard Game Fan got all the "legit" industry cred, Game Players was a wild and wacky book with running gags, a letters page that was 80% joke-topics (leaving the rest for actual video games), and stands out even today.

As memorable as the magazine's humor was at the time, Game Players would change again after a few years. 1996 saw the magazine turning into Ultra Game Players, at which point they tried to drop most of the humor and changed a great deal of the staff. Their review system, originally based off of Graphics, Sound, Gameplay, Innovation & Replay Value, now exploded into a huge eighteen category scoring system. This did not go over well, so the humor was gradually worked back into the magazine. By 1998, the magazine had changed into yet another format under the name of Game Buyer. Four issues later, the magazine collapsed and was shut down.

Its editors and writers moved on elsewhere — Chris Slate has had the most success of the group; he would eventually become editor in chief of the now-discontinued Nintendo Power, and is now editor in chief of Mac Life. Bill Donohue, who worked with Slate at PSM, still writes Jaded Gamer columns (they debuted in the Ultra era), Frank O'Connor eventually wound up at Microsoff in charge of the Halo franchise, Chris Charla is running the new Xbox One Independant Developers divsion, Francesca Reyes is editor in chief of Official Xbox Magazine, and Mike Salmon is Director of Research and Planning at 2K Games.

This magazine contained the following tropes: