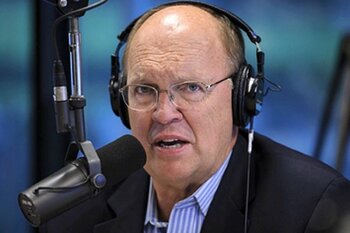 , the self-styled "High Priest of the Church of the Painful Truth," is a former American Libertarian talk radio host based out of Atlanta. He has also written several books, including Somebody's Gotta Say It and was co-writer of The Fairtax Book and its sequel.

He retired as a full-time radio host in January 2013 after 42 years of hosting his show, handing the reins over to long time colleague Herman Cain. He continues to provide his political commentary, maintains an active presence on Twitter

, and once served as a substitute host for Herman Cain and Sean Hannity. He maintains a podcast known as the BoortzCast. In 2016, he announced that he had negotiated a new agreement to once again sub for Herman Cain, who would later pass away in 2020.

Neal Boortz and/or his show provide examples of: