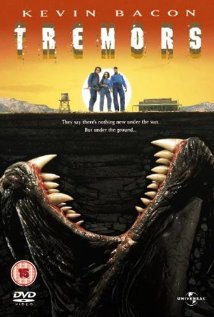 See that toothy maw there? That's only one of its tongues.note Okay, they exagerrate the size a fair bit
"They say there's nothing new under the sun. But under the ground..."
Advertisement:

Tremors is a 1990 Horror Comedy film about subterranean monsters. It is considered a Cult Classic for the way it plays with the typical monster movie tropes. The citizens of the isolated desert town of Perfection, Nevada find themselves under siege by "Graboids" (as they name them): massive, subterranean worm monsters who hunt prey by sensing ground-vibrations. It falls to two redneck handymen, Val and Earl (Kevin Bacon and Fred Ward, respectively), to save the town.

It was directed by Ron Underwood and eventually spawned a franchise with six sequel movies, a prequel movie, and a short-lived TV series: