Comic Book / The Fight for Asgard 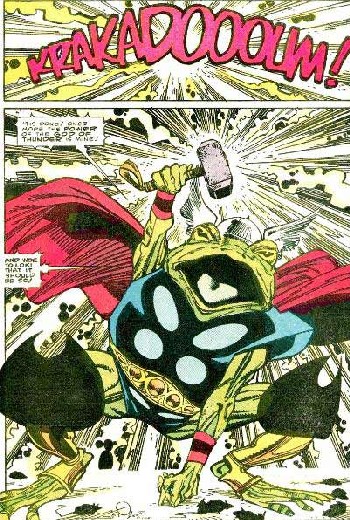 Sometimes, words are not needed
Advertisement:

The Fight for Asgard is a storyline of The Mighty Thor, written by Walt Simonson. It is the (in)famous storyline where Thor gets turned into a Frog. Yes, exactly as it sounds.

Surtur was sent back to Muspelheim at the end of The Surtur Saga, and Odin fell into the abyss with him. In the aftermath of the war, Odin is missing, Asgard is in ruins, the Bifrost has been destroyed, and the Asgardian troops are trapped on Earth. Thor, distraught at losing his father, travels into the wastes of Asgard and meets a mysterious god who turns out to be his great-grandfather, Búri who restores his strength and spirit.

Lorelei, who had previously seduced Thor with a magic potion, is given an even more effective one by Loki, and is able to enchant Thor when he returns to Asgard. Uncontrollably in love with her, Thor begins to vehemently support Loki's bid for the throne of Asgard, even slapping Sif when she tries to snap him out of it. Unfortunately, the Enchantress (Lorelei's sister) has enchanted *her* to fall in love with Loki, so Thor arrives at Loki's castle to see them canoodling. Thor throws Mjolnir into the heavens and grabs Loki by the neck, giving him until the hammer's return to undo the potion's effects or be destroyed by the mystic mallet (a gag stolen by Thor: Ragnarok). Thor returns to Asgard, unhappy and heartbroken. The combined hammers of Thor (in Asgard) and Beta Ray Bill (in Earth) manage to open a portal big enough for the troops.

After revealing the death of Odin to the troops, Thor called them to arms once more: several human souls have been trapped in Hel by the machinations of Malekith, and must be freed. They make the dangerous journey to Hel, and narrowly avoid being destroyed by Hela's illusions. Thor challenges Hela to single combat, and manages to defeat her, although his face is terribly scarred by her Hand of Glory. Hela promises to allow Thor, the Asgardians and the human souls to leave unmolested, but is able to trick the Executioner into breaking the truce and attacking her first — although she immediately regrets this as he sacrifices his axe to destroy Naglfar, the ship of the dead with which Hela plans to attack Asgard. Chased by Hela's forces to Gjallerbru, the bridge on the border of Hel, Thor orders the Asgardians to continue and to leave him to hold the bridge by himself, sacrificing himself to save the human souls. The Executioner knocks Thor unconscious and takes his place, stopping Hela's dead soldiers with machine guns (obtained during the last visit of the Asgardians to Earth), an act that, according to the text, makes him "the one to whom even Hela bows her head".

The Asgardians return to Asgard, Balder returns to the Nornqueen Karnilla, and Thor returns to Midgard (Earth) to release the souls. He is immediately attacked by Kurse, one of the elves that fought with him in the previous storyline, turned into a nigh-allpowerful being by the Beyonder. Thor and Beta Ray Bill are unable to stop him, but during the fight he realized that his true killer had not been Thor, but Malekith; and redirected his hatred to him, completely forgetting about Thor. Thor convinced the Beyonder to send Kurse to Hel.

Beta Ray Bill left for Asgard, with Thor following soon, but then Loki (who was tapping the power of Surtur's sword) enchanted a random woman to go and kiss Thor, which turned him into a frog. Thor ended up in Central Park, and helped the frogs in a war against the rats. He eventually returned to the place where his hammer was still laying, and got an idea: the enchantment that says that "Whoever holds this hammer, if he's worthy, shall possess the power of Thor". Managing to raise it a bit from the ground and touching the ground with the base, he turned from a frog into... an anthropomorphic frog with the costume and power of Thor! He headed to Asgard immediately, where Loki has been showing the Althing of the Asgardians that he is now capable of carrying Mjolnir (really a fake), showing that he has changed his spots. Thor's allies dress Harokin, the leader of the Einherjar, as Thor and delay proceedings by a week, giving the real Thor enough time to defeat the rats, reclaim Mjolnir, and travel to Asgard. In a flash of red and green, Thor kidnaps Loki and flies with him out of Asgard, demanding that he turn him back into a non-frog-form. Loki claims that he is unable to, but Volstagg accidentally sets off an avalanche of stone that destroys the machine tapping the power of Surtur's sword, restoring Thor to his usual form.

Thor proposed to the Asgardians that they select Balder as the new ruler, which they do. Balder is called back to Asgard and is crowned ruler, but the ceremony was interrupted by Kurse, who kills him. The crowned Balder turns out to be Malekith in disguise. Thor and the Warriors Three set out to find Balder.

The Fight for Asgard contains examples of: