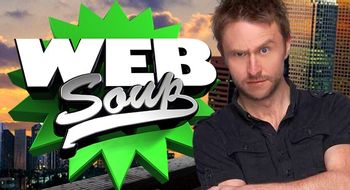 Web Soup is a Clip Show that aired on G4TV from 2009-2011, hosted by Chris Hardwick. It's a Spinoff of E!'s The Soup; rather than TV clips, a variety of clips taken from around the internet are snarked upon.

Common segments on this show include: