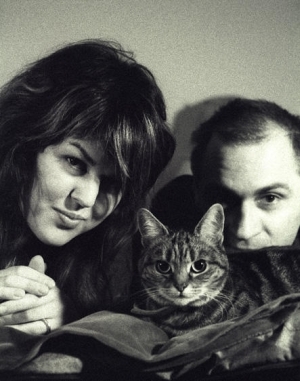 Galia Durant and Carim Classman.
Psapp is an English experimental electronic duo, consisting of Galia Durant and Carim Clasmann. They are mostly credited to have invented a musical genre called toytronica, which is electronic music made with toys and/or toy instrumments.Though they are not really known, Psapp is responsible for creating the music theme for the medical drama series Grey's Anatomy, "Cosy in the Rocket". They're also know for their sense of humor on stage, usually throwing hand-made cats on the audience.
Advertisement:

It's hard to define Psapp's musicality. Some songs look like some kind of bossa nova, others sound really experimental, and others are more close to electronica. But it can be agreed that their tunes sound dreamy and child-like, together with Galia's smooth voice.

In 2009, they released the EP Early Cats and Tracks- Vol. II, a copilation of old songs presents in other EPs, then they went in a hiatus until 2012. At that time, Galia was dedicating herself to an illustrator career, with a brand new website

Their music, videos and themselves include examples of: