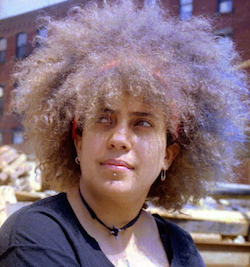 Kimya Dawson (born November 17, 1972) was that woman who sang a bunch of songs from Juno. Okay, with that out of the way...
Advertisement:

Kimya is a singer/songwriter from Washington whose style is commonly classified as anti-folk. More specifically, Kimya makes acoustic, lo-fi pop songs — usually armed with only her guitar and her girlish singing voice — with revealing, guileless, even cutesy lyrics. Her subject matter ranges from death and diseases to pop culture references and ranting about the negative health effects of wheat.

She was a member of indie pop band The Moldy Peaches, who are currently on hiatus. She also joined rapper Aesop Rock for the side project The Uncluded, who debuted with their album Hokey Fright in 2013 and are still touring together.