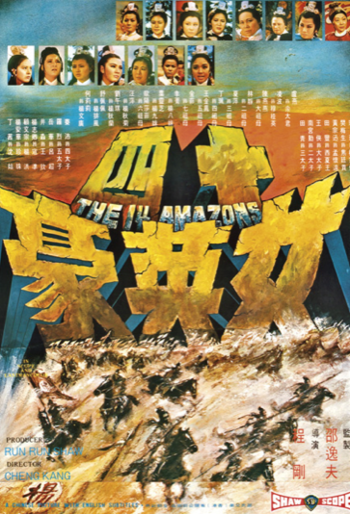 Very Loosely Based on a True Story, notably the generals of the Yang family

(楊家將) who defended the Song Dynasty from Tangut invaders from Western Xia at the cost of their lives, after the Yang family generals died in the war, they are taken over by their wives and sisters, a whole legion of Amazonian warriors dedicated to avenge their husbands and brothers.

After Commander Yang Tsung-Po is brutally executed in a war against invading Tanguts, with none of his soldiers surviving the battle, the Yang family matriarch led by Mu Guiying (Ivy Ling), Yang Tsung-po's wife, is eager to avenge her husband, as was Yang's sisters and the other wives of the Yang family who had lost their spouses in the war as well. But facing rejection from the imperial court due to gender inequalities, the wives and sisters and a top female guard of the Yang family — fourteen of them — ultimately decide to embark on a campaign with their own private army, to take on the Tanguts in an epic final battle.

The 14 Amazons contains the following examples: