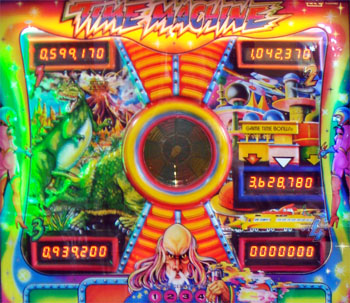 Starring Doc Brown's Evil Counterpart
Scientist: "Now you will go into the past."
Advertisement:

Time Machine is a Physical Pinball Table manufactured by Zaccaria in 1983.

The game casts the player as the assistant to an unnamed Scientist who has invented a Time Machine. Beginning in the future, use the four bottom flippers to shoot the bumpers and standup targets to build up the Bonus Future. When you're ready, head for the Time Hole to activate the Time Machine, retract the main playfield, and enter the distant past. While in the past, shoot the fixed targets to complete the machine and light the Green Special, then build up the Bonus Past. Return to the Time Hole to travel between the past and the future, orbit the Time Bridge to raise the bonus multiplier, then master time itself and get the Machine Special.

Among the titles in Zaccaria's modest game library, Time Machine stands out for being one of their more memorable titles, as the retracting playfield was a great innovation at the time. Unfortunately, it's also the game's main weakness: Playing in The Past is a very spartan experience, which makes that portion of the game tedious as a result. Once the novelty wears off, what's left is a decent but unspectacular game.

A digital version of this table is available on Zaccaria Pinball.

Scientist: "You have ruined the experiment."