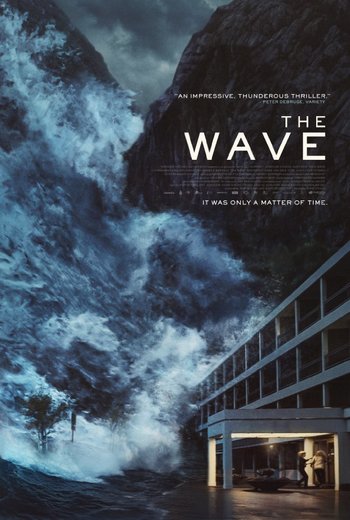 The wave is coming!
Advertisement:

The Wave (or Bølgen) is a Norwegian disaster movie released in 2015, with an unusual (and frighteningly plausible) disaster at its core.

The setting is the small tourist village of Geiranger, near one of Norway's many scenic fjords. Tourist season is in full swing and the little four-story hotel, built right into a mountainside, is packed. However, nearby is the Åkerneset crevasse - a point where the entire side of a mountain above the fjord is loose. A monitoring station nearby keeps a close eye on movement in the crevasse, waiting for the inevitable day when the mountain comes loose into the fjord. It stands ready to warn Geiranger and the other lower-elevation towns that a Giant Wall of Watery Doom is on its way.

Most of the movie centers around Kristian Eikfjord, a geologist on his last days working at the Geiranger station, getting ready to move his family up to bigger and better things. His wife works at the tourist hotel nearby, and son and daughter are going through the usual pre-moving blahs. Very early on, however, Åkerneset starts giving off warning signs, leaving it to Kristian to try and save his family when the wave starts its inexorable march down the fjord...

A rare special-effects blockbuster from Norway, The Wave depicts a little-known but spectacular disaster, the displacement megatsunami, which one day will actually happen. Will Geiranger be prepared when that day comes?

A sequel called Skjelvet (The Quake) was released August 31. 2018 (Teaser

Not to be confused with the two movies also called The Wave (1981), about a youth movement based on fascism that goes out of control.

The Wave features examples of: