Comic Book / The Fall of Metropolis 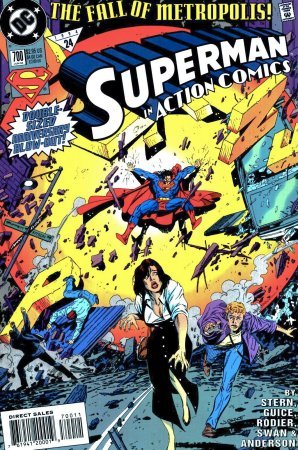 The Fall of Metropolis was a multi-part storyline that ran through the Superman titles in 1994. This storyline was the conclusion of a number of storylines that had been running since the early '90s, leading to Action Comics' 700th issue.
Advertisement:

Lex Luthor is dying. Having cheated death once by transferring his brain and eyes to a healthy clone body and posing as his own son, Lex Luthor II, a clone malady has struck and is killing him. Attempts to clone Superman and the Matrix Supergirl have failed and his last hope is Project Cadmus. Of course, Luthor is a vengeful bastard and decides to paint a picture of Cadmus as monsters who are poisoning him and others. The end result is a Mêlée à Trois between Cadmus, Lexcorp and the creatures known as the Underworlders that put Metropolis and Superman in the crossfire. By the time this fight ends, Metropolis will never be the same.

The story was split into two halves - the first half was The Battle for Metropolis, which chronicled the war between Cadmus and Lexcorp, and The Fall of Metropolis, which chronicled the destruction of Metropolis and its immediate aftermath. The story saw not only the conclusion of a number of storylines, but also the deaths of a number of famed supporting characters and set the stage for the crossover with Milestone Comics, Worlds Collide (1994).

The Fall of Metropolis provides examples of: