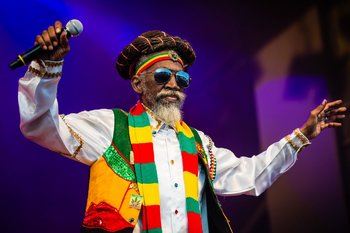 Neville O'Riley Livingston, better known as Bunny Wailer (or Bunny Livingston) was a Jamaican musician who was the third member of the singing trio The Wailers featuring Bob Marley and Peter Tosh. He was the longest living member too, as whilst both Bob and Peter died in the 80s, Bunny lived until 2021, when he passed away at the age of 73. He was Bob's stepbrother in his childhood (his father having gotten together with Bob's mother), and his sister had a child with Peter Tosh, so there was a family connection too.

Whilst he did not achieve as much success as the former two (primarily due to a distrust of the music industry) - a number of his recordings remain well regarded, in particular his first album "Blackheart Man". Unlike Bob and Peter, who became highly involved with major labels, Bunny preferred to release his music on his own label, Solomonic, which greatly affected its availability.

Bunny received numerous awards for his contributions to music, including the Order Of Jamaica.

To have you all in my tropeland would be like heaven to me: