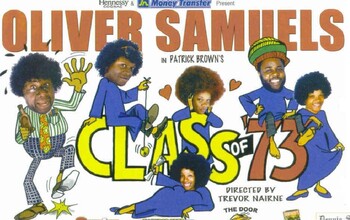 Class of '73 is a 2005 Jamaican film and DVD-recorded musical stage-play starring an ensemble cast including Oliver Samuels, Glen "Titus" Campbell, and Camille Davis, directed by Trevor Nairne and Patrick Brown and distributed by Jambiz Films.

Set in 1973 (of course), the plot focuses on the efforts of educator B.B. Bringle (Samuels) as he heads to Ackee Tree All-Age School and tries to prepare the students of the school's bottom-of-the-barrel class, known as 6-Z ("six-zed"), for the upcoming Common Entrance Examination. This, despite there being no hope that these particular children will have any chance of passing the exam, because of their varying levels of Book Dumb and Cloud Cuckoo Lander characteristics.

Among the students Bringle must prepare for the exam period are Milo (Campbell), a perpetual kleptomaniac; Racquel (Davis), a high-maintenance girl whose mother is an exotic dancer; Mutombo (Courtney Wilson), a boy with a permanent stutter; Carlos (Roger Williams), who constantly sucks his thumb; Dorcas (Magan Lewis), who has serious dental hygiene issues; and Phoebe (Sharee McDonald-Russell), a young girl with a constantly active appetite. The preparation period will definitely not be a simple matter for the kids, either, since Bringle himself isn't much better in terms of temperament or even intellect.

(Note: Because the dialogue in the film includes the Jamaican patois dialect, a lot of the jokes and punch-lines won't work if translated into standard English. Therefore, where needed, explanations and translations will be provided.)

Examples of tropes in this work include: