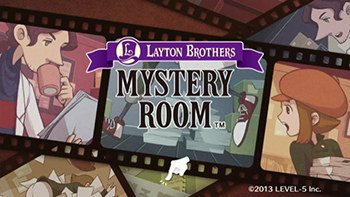 Layton Brothers: Mystery Room is a puzzle Visual Novel for the iOS and Android, created by Level-5 and released in 2013. A spinoff to the Professor Layton game series, the game focuses on Professor Hershel Layton's son, Inspector Alfendi Layton, and his young assistant, Detective Constable Lucy Baker, who solve seemingly-impossible murder cases for the Scotland Yard. It received an ongoing manga adaptation in December of 2021, under the title of Reiton Burazazu: Misuteri Rumu Kanzen Hanzai no Pazuru.

Layton Brothers, unlike the other, more puzzle-oriented entries in the main franchise, plays much more like a visual novel. The game is played in a semi-episodic format, consisting of a number of cases which each take roughly half an hour to an hour to finish. A case typically — but not always — consists of alternating phases of crime scene investigation, questioning of one or more suspects, and discussing inconsistencies, and in many ways resembles a game from the Ace Attorney franchise, as everything is tied together with dialogue.

The first two cases are available for free, while subsequent case bundles need to be purchased.