Recap / The Good Place S1E01 "Everything Is Fine" 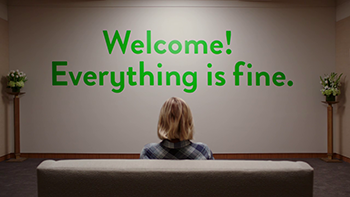 "Right, so, you, Eleanor Shellstrop, are dead. Your life on Earth has ended, and you are now in the next phase of your existence in the universe."
— Michael

Eleanor Shellstrop wakes up to find herself in a waiting room, with the words "Welcome! Everything Is Fine." written on the wall. She then enters a room where a man named Michael awaits her. He informs her that she is dead, killed after a line of shopping carts in the parking lot of a supermarket pushed her into the oncoming path of a truck, and the space they are in is a Heaven-like utopia called "The Good Place."

Michael gives her a tour throughout the Good Place neighborhood she'll be residing in before getting her to meet with newcomers and watch an informational video. In the video, Michael explains that every action humans make in their life gives them either positive or negative points depending on their choices. After a person dies, their total points are tallied and only people with very high points are allowed into the Good Place. Eleanor earned her spot for her humanitarian work as a lawyer that defended innocent people on death row. Also, every person in the Good Place has a soulmate, a person with which to spend their eternal life together.

After presenting Eleanor with a house designed specifically for her preferences, Michael introduces her to her soulmate, Chidi Anagonye, a Senegalese ethics professor. When Michael leaves, Eleanor reveals to Chidi that everything Michael said about her life is wrong and she's not the person he says she is. Eleanor made a living by knowingly selling fake medicine to the sick and elderly and was crass and selfish, not recalling any good action she's ever done. Michael then introduces Eleanor and Chidi to Tahani Al-Jamil and her soulmate Jianyu Li, their neighbors. Tahani is a wealthy philanthropist while Jianyu is a Buddhist monk who has decided to keep his vow of silence. Eleanor is also introduced to Janet, an AI construct and repository of all information in the universe who runs the neighborhood and can grant the wishes of anything a resident desires.

While at a party hosted by Tahani and Jianyu at their mansion, Chidi begins to question whether to help Eleanor or not. The next morning, Eleanor wakes up to discover that many things that represent her crass comments about her life and her insults to Tahani at the party have taken physical forms and are wreaking havoc on the Good Place. Chidi tells her that remaining in the Good Place is cause for the incident and her actions are affecting it. Eleanor then begs Chidi to help her become a better person just as Michael knocks on the door to inform them of an emergency meeting.

Example of:
Gosh Dang It to Heck!