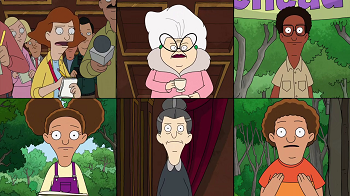 Original release date: May 29, 2020
Written by: Loren Bouchard, Nora Smith, & Regina Hicks
Directed by: Gavin Dell
♫ I'm gonna own it
And my name is
Yeah, my name is Owen and I own it
And I like my
And I like my flowers when they bloom
In the moon like the fruit of the loom
You can say I'm a loon, but I'll celebrate my turtleheads and own it ♫
—Owen, "Own It"
Advertisement:

Owen tries to get his family excited about "Turtlehead Day" at Central Park. Bitsy is upset that her dog, Shampagne, has disappeared and puts out a $55,000 award money to whoever can find her dog, who was last seen in Central Park.

Owen: ♫ Son, we gotta think about the consequence
What if we are sent to doggy jail for this?
Can't keep this dog ♫
Cole: ♫ Papa, I believe this puppy's heaven-sent
I promise to pick up his every excrement ♫
—"Poops I'll Pick It Up (End Credits)"
Feedback

Birdie introduces himself as the narrator of the show and introduces the main characters by peeping through their windows, which isn't creepy at all.

Birdie introduces himself as the narrator of the show and introduces the main characters by peeping through their windows, which isn't creepy at all.