Fanfic / Janna vs. the Forces of Evil 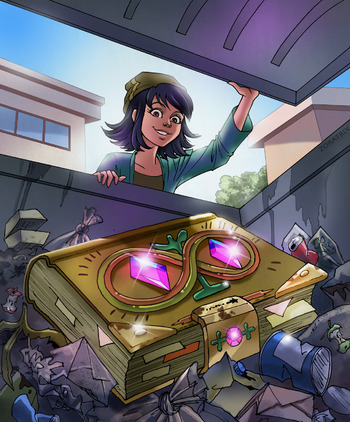 It's gonna get a little weird~
Art by Zoratrix

Janna vs. the Forces of Evil

is an ongoing Star vs. the Forces of Evil fanfic written by Jason "TheInvaderZim" Valdor and sirkylelenn.

Janna Russo views life in her hometown of Echo Creek to be pretty boring, with its disappointing lack of mystic portals, eldritch abominations, or any other otherworldly elements. And the troublemaker's years of attempts to liven things up have all proven to be failures in the long run. Thankfully, that all changes when one of those aforementioned mystical portals she's always dreamed of suddenly opens up in the sky and spits out a gigantic spell book into a nearby dumpster. With resident safe kid Marco Diaz along for the ride to help mitigate all the inevitable damage, Janna is now on the path to become a sorceress who can finally bring some fun to her mundane life. Of course, this begs a few questions: where did the Magic Book of Spells come from? Why is Janna the only one able to read it? And who used to own this thing anyway?

The fanfic began in October 2016 and had entered the second of a planned three-season Myth Arc before Zim and SKL began writing a revised version of the fanfic in August 2019 entitled Janna vs. the Forces of Darkness, which constitutes Chapters 30 and ownward. The writers run a Tumblr over here

Janna vs. the Forces of Evil provides examples of: