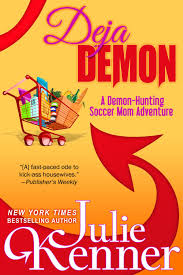 During her youth, Kate was a badass demon hunter. She was an orphan who was taken in by agents of the Vatican and trained to fight demons when they come to our dimension with their evil schemes.

But eventually she met Eric, her true love, and after years of being a Battle Couple, they decided to retire, marry, and pursue a normal life.

Kate's now on her second husband due to Eric's sudden but tragic death. She has daughter Allie, just about to turn fourteen, and son Timmy, aged two. And her past Buffy-type lifestyle is about to come home to roost. Can a mom with two kids and a bunch of housewife responsibilities keep Santa Diablo safe from demonkind's evil machinations?

So far, the series consists of: