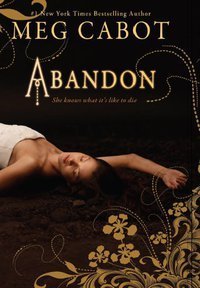 A series of Young Adult novels written by Meg Cabot. The series is a modern retelling of the Greek Myth of Persephone and Hades.

Pierce Oliviera has had a near death experience. Actually, she really did die. After drowning in her pool, Pierce woke up in the Underworld, where John Hayden - the Lord of the Underworld, has chosen her to be his consort. Frightened as the prospect of being bound for eternity at the tender age of 15, Pierce escapes back to the realm of the living.

Two years later, Pierce and her mother move to her hometown of Isla Huesos. Despite Pierce attempting to move on, she feels John's presence everywhere and cannot shake the idea of him still following her. But there is another presence, a much more unsettling force. The Furies, vengeful spirits, who want to cause John anguish and force him to suffer. By using Pierce, if necessary.

Pierce begins to learn more about the history and secrets of Isla Huesos, the Underworld, her family, and John himself and begins to fall in love with the man she once feared.

Tropes Appearing in the Abandon Series: