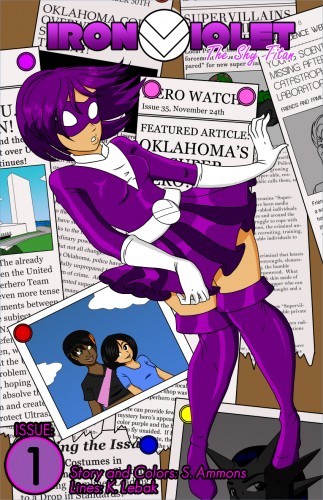 is a superhero/manga-styled webcomic. It is written and colored by Skyler Ammons. The artist for Chapter 1 was Kayleigh Lebak

. The the current artist as of Issue 2 is Francis Julian Lim

Yuri Hasagashi has always been a shy girl. She's never been quite brave, and has little to no confidence in herself...despite the fact she can bench press a tank and bounce bullets off of her chest. After the recent explosion of supervillain crime in the once peaceful Oklahoma — and a little nudging from her best friend Kat — the timid would-be heroine must step up to defend her city and her state as Iron Violet, Oklahoma's first superhero! Now if only she could stop panicking and breathe for a moment...

The comic was formerly hosted on ComicFury, but is now hosted on it's own site

(which hasn't been updated since February 2017).