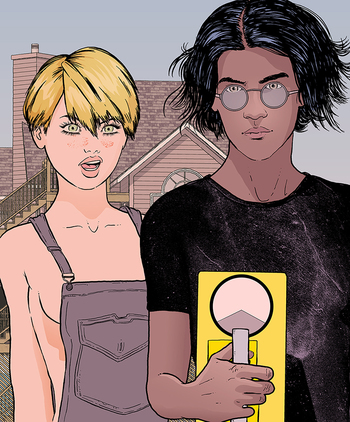 Pamela and Anant, main characters of THE ISLAND

is a webcomic created by Diego Guerra in 2017.

World War III happened. The USA and Russia are just ruins, and the rest of the world is plagued by diseases caused by chemical weapons. Anant, an Indian scientist, arrives at an apparently deserted island in New England Coast. There he finds two sisters, Pamela and Janice, and Peony Hill, a ghost town full of stray cats. The three become a love triangle, and they face friends and foes from different sources.

The Island is updated three times a week. The characters are realistic and the backgrounds are highly detailed. The plot uses elements from Post-Apocalypse sci-fi, some eroticism and comedy.

The Island provides examples of: