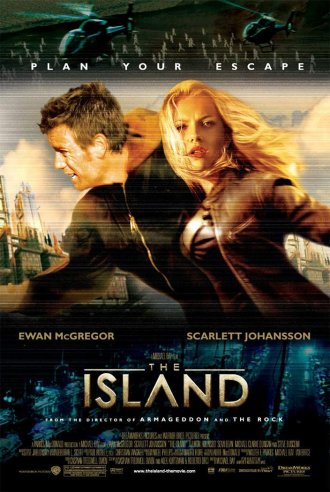 "You're special. You have a very special purpose in life. You've been chosen. The Island awaits you."
Advertisement:

The Island is a 2005 film by Michael Bay set 20 Minutes into the Future starring Ewan McGregor as Lincoln Six Echo and Scarlett Johansson as Jordan Two Delta. They live in a tightly controlled facility for "survivors" from a vague disaster that rendered the Earth uninhabitable except for "The Island", a paradise on Earth. Periodically, survivors "found" in the outside world are brought in, needing to learn basic skills like reading, while others "win the lottery" and get to go to the island.

It turns out they're all clones that will be used for spare parts as part of a life-insurance policy, and those sent off to The Island are killed. When Lincoln starts getting dreams from his original he gets curious and stumbles across a harvesting procedure. Caught, he manages to escape, but goes back to rescue Jordan and the two escape to the outside world.

Many fans consider this an unofficial remake of Clonus, since both share far too many similarities to be coincidence (in fact, the director of Clonus sued and won an out-of-court settlement). It also seems to have echoes of Logan's Run, along with blatant imitations of THX 1138. Also notable for being one of the many movies in which Sean Bean is a bad guy (and dies).

Not to be confused with the 1980 Michael Caine film about pirates.

If you are looking for the novel by Elin Hildebrand, click here.